Readers, I’m sharing one of my original (fiction) stories, from my collection Rest in Fleece.  I was inspired to write it when looking back over Bad Date notes among friends – but I must say, none were this bad.  😁  Like all really scary stuff, it’s (nearly) true!

Jake had tired of being single. After his breakup with Trisha, things had been good:  no more bitching about who didn’t take out the garbage, who didn’t wipe the dishes,  who didn’t this, who didn’t that, blah, blah, blah. But after a time, his own company (and having to iron his shirts) got old.  You can only eat so many frozen dinners.

What to do? Jake’s buddy Cal had done well with online dating services. (In Marin County, the women outnumbered the men seven to one).   So Jake followed suit and claimed he was from Mill Valley.  Jake was actually from Richmond. There were other wee variations from reality in his dating profiles: his height (more), weight (less), his occupation (a better one), his age (younger), and his interests (what interests?).

Jake was, to be brutally frank, an utter cad.  His social rap sheet was rife with many particularly vile examples of assholery. He had been known to excuse himself to go to the men’s room at the end of the meal, then slip out the back door, leaving his date to pick up the enormous tab.  He was also deft at texting other women while on dates, even carrying on phone conversations (a Luddite, he still wore one of those Bluetooth devices over his ear, under the mistaken impression it was a cool look).  The light blinked, hypnotizing his already stupified dates.  Those who managed to stay conscious thought he had a Third Eye.

He was disrespectful, late and laggardly. He refused to open doors or pull seats out. His was the Genghis Khan School of Etiquette.  Occasionally (if he wanted something) he’d pull out all the stops and buy flowers (two day old, half price bouquets, from the supermarket).

Jake accepted dinner invitations from women who cooked, and usually by the second course had already found things about which to complain.  He’d say he had allergies. If a woman grilled steaks, he’d be vegetarian.  Fish: he would informatively discuss toxic mercury levels in the ocean.  If he got chicken piccata, he’d whinge about capers.  It was always something. To make matters yet worse, his phone was right there on the table, so he could text other women and receive their calls.

When out on the town, it was not unusual for him to ditch his date for someone cuter across the room. (He liked to keep his options open).  He also (at least once that I know of) had been known to strand a woman by leaving her at one party, while he moved on to the next, better one.

The holidays were his favorite season. He would hint at wonderful presents in order to be sure the woman got him something good. Then when gift exchange time came, he’d say earnestly “I sent it back, it wasn’t good enough for you.”

He insisted his women all be slender as anorexics, making him king of the unwelcome remark:  “Dessert? Really?” “That top makes you look fat.” “She’ll have the salad, no croutons, no dressing.”

How you ask, did he get by with it?  Simple.  He was very attractive and dressed well.  He looked good (on paper). No new dates knew how the old ones had gone. When asked how it was that he was still single (this question never came up after a date) he would reply “I just haven’t met Ms Right. Until maybe now!”  People always hope for the best. And so it would go.

One night, Jake sees an ad for a new dating service on late night tv, cutting into his movie. Matchsticks dot com.  Our Matches Stick Forever!  He can’t resist. He gets to the website, registers and logs on. It has an immediate effect on him, almost as if the very website emitted a magic that made it unusually delicious and magnetic.

Jake is certainly blown away. Never has he seen so many unspeakably beautiful ladies in one place. (Usually they were all dogs).  He wonders briefly if this is one of those rip off mail order bride sites.  But no, they’re not Moldavian.

He decides to try the Matchsticks Matrix, even though it costs him a tenner (generally he is averse to ponying up money in his search for love).  He plugs in his astrological sign (he writes Aries. His real sign is Dungheap), hobbies (he makes these up: lacrosse, polo, fine dining).   He finishes his personal inventory and presses “enter.”  In a very short time his computer dings: he has received an email with a list of potential matches.  He opens it to a slew of highly eye-catching photos.  He adores them all.

He ponders his choices: Lillythe, an attorney, a gorgeous brunette.  Hekatie, a ski instructor from Vail.  Isis, a restaurateur. But wait.  Hold the phone.  Who’s this? His eyes bug out like those of a cartoon character who has just ingested a bottle of arsenic.

Her name, it says, is Charlotte Ann Abaddon.  Her motto:  “Call me Bad.” She is completely fetching” tall, blonde, huge blue eyes, long legs. Her profile says she’s a professional, an actuarial accountant with the firm Brackisch, Dante and Sludge.  She models for that fashion mag, Vive le France, and likes wine tasting, opera, poetry and art.  She’s dressed in cool, urban-chic black.

Profiles like this might intimidate many guys.  But not Jake, whose self esteem knows no bounds: it spills over, drowning his common sense.  He snaps a fast selfie with his iPhone, downloads it to his computer to airbrush, then sends that with a quick note to Charlotte Ann.

The next day, Jake gets an email from Matchsticks that Charlotte Ann has responded to his message.  He logs on, reads her missive, and is quite giddy with pleasure.  She can’t wait to meet him.  (Again, his intuition, such as it is, sits downcast in the corner of his consciousness, shouted down by the bully: his ego).

Charlotte Ann invites him to cocktails at the Fairmont. He says yes, and leaves work early to take BART into the city.  He stops at Nordstrom’s to get new clothes (his entire wardrobe lies crumpled in a smelly, moldy pile next to his washer and old newspapers he forgot to take out) and changes in the store.  He arrives early and wanders up to the Hurricane Bar.

Jake doesn’t bother to soak in the atmosphere at this famous spot. His phone holds more allure. He’s busily texting away when the lovely and statuesque Charlotte Ann arrives at his table.

“Hi, I’m Charlotte Ann.  You must be Jake.  My, you look so much better than your photo. So often it’s the other way around,” she says, shaking her lovely head.

“So true,” Jake commiserates.  “A pleasure to meet you.  You. Look. Marvelous.” (He spews out that tired Ricardo Montalban line like some third-rate Hollywood agent).

Charlotte Ann smiles (her teeth are Crest White Stripped, and just slightly long) and asks for the drinks menu.  She orders a Zombie. (Hint).  Jake gets a Singapore Sling.  They sit there with their umbrella drinks. For once, Jake is really taken with a date. She is so stunning.  He keeps his Bluetooth in his pocket, along with his iPhone.  He gazes into Charlotte Ann’s eyes and falls, hard.  This is new for him.   He is awash in the rosy glow of love at first sight.  Unfortunately, no second sight was involved.

Soaking in his new infatuation (and alcohol), Jake doesn’t observe little things:  the server knowing exactly how Charlotte Ann likes her drinks, or the bartender reading her hand signs like a baseball pitcher watching the catcher.   He doesn’t for a nanosecond wonder why such a hot ticket is hanging on his every (lame) word, not to mention his endless monologue about football. It’s all there for Jake to see, but it’s hiding behind his hubris: invisible.

Several drinks and appetizers later, Charlotte Ann excuses herself to powder her nose.  Jake waits for her return. He people watches. He waits. He plays with his cell. And waits.

“Sir,” says the server, and presents Jake with the check.  It’s a steep one: after all, this is the Fairmont.  Jake wonders if he has enough credit on his bank card.  He hands it to the waiter and holds his breath.  Meanwhile he begins to feel slightly sick.  He goes to the men’s room to wash his face.

The door automatically clangs shut behind him. It’s sealed tighter than a bank vault.  Jake is befuddled.  But not for long.  Because his brain fog is a result of the loaded drinks: now he’s in a state of encroaching paralysis. As he stands there, the men’s room makes up for his lack of motion and swings to and fro. (Hey, it’s San Francisco. It’s an earthquake).

After it’s over (safety first), the men’s room, with a sound like a muffled fart, begins to descend. It’s really an elevator. And it’s going down.  ‘Way down.

Ding! The elevator stops. It’s been a long ride indeed, and Jake has fallen asleep on the floor. Jake’s consciousness switches to the “on” position at the sound of another fart, which heralds the unbolting of the door.  It is opened by a  . . . wha’?

A daemon!  Even now, Jake is shallow.  Rather than his destination, he’s all about appearances.  “Eeeuu, so ugly,” he thinks. Look at that scaly skin, the ET eyes, the claws, the tail.  And fat.  Rolls and rolls of it.  If daemons had weight, this one would be an easy half ton.

Noting the flames and brimstone in the background, Jake now regrets the countless skipped Sunday schools, slept-through sermons, the “I’m not religious.” They were RIGHT.  Uh oh.

He looks at the daemon again and suddenly recognizes the shoes.  Those Louboutins were the exact same pair on Charlotte Ann’s pretty feet!  Did the daemon capture her, too? No wonder she didn’t come back! He’d better see where she is.

“Jake, Jake.”  The daemon spoke, but in Charlotte Ann’s voice.

Jake nearly pisses all over himself.  What a turn of events this is.

“Yes, the very same.  Call me Bad.  Come on down. Welcome to Purgatory. I’m in charge of this department.”

“Which is?” asks Jake, still numb.

“‘Our Matches Stick Forever.’ Truth in advertising, you know.”  Charlotte Ann took a moment to pick her snout with an aardvark claw, examining her lode before releasing it to the fire pit on her immediate right, where it sizzled a moment.

“Come on, Jake, sweet pea. Time for our second date.  We have all eternity.”  She shows her teeth (somehow, they are still sparkling white) and prods him with her trident. 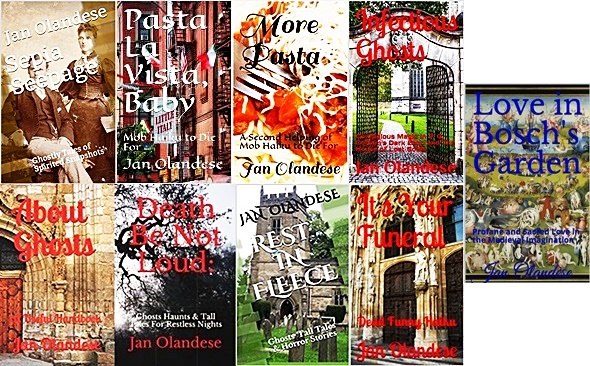